It feels like only yesterday we were celebrating the end of 2020, a year which frankly defied expectations. For many, we saw a light at the end of the tunnel in Spring of ‘21.

However as many sensible people cautioned us: This current era is a marathon, not a sprint. For me 2021 was when I hit the wall, a few tricky experiences (arising from lockdown & remote-everything!) genuinely hurt - but I’ve moved on. Oh, and along the way I also somehow killed a bonsai tree. :(

The year felt long, and yet now in retrospect feels incredibly short - but there’s a lot to unpack.

Largely this year involved less technical learning than earlier years. In 2020 I helped my team re-platform some large chunks of legacy technology into microservices with island architecture on the front-end. Along the way I began working with TypeScript, edge-computing and building “test-in-prod” safe production environments.

2021 has been largely the same, with the addition of bringing some machine-learning and natural-language-processing tooling in to begin understanding the meaning of some content. That has been by design: My area has been attempting to build quickly and learn from customers which has meant leaning on better known technology.

In 2021 I started using AWS CDK for some side-projects and started building a few personal helper utilities. Most of my learning has been directed towards data platforms & product-management practice.

I’m not yet sure where to focus my efforts in 2022 yet, although this will likely emerge later in the year. (Some people are learning Rust - picking that back up might be fun?)

At the start of the year I joined a new team called “Professional” which had a mission to build new products and to begin improving the B2B offering.

I’m quite proud of what we achieved!

Outside of my team:

My team’s journey over the year was one of convergence: We began by diverging (picking our own stack, tools, data platform, etc..) to optimise for autonomy. Later we began re-converging to benefit from the work of other teams. It’s genuinely hard to say which is better for lean product development, but overall I’m pretty thrilled that we could adapt our approach in the same lean manner.

At the end of the year, while I won’t reflect on these experiences too closely, I feel like I grew both as an engineering manager and as an individual contributor although I really found recruitment challenging this year: That part was brutal.

This year I had hoped to get some experience working in a Product Management role, and while I learned a lot more about the process, unfortunately it didn’t happen. I realised that this is something I’m deeply passionate about and will attempt to explore in more depth at a later point.

In 2022 I’m moving to a new team: Customer Products, who are responsible for FT.com & the apps. While it’s really hard saying goodbye (but not farewell!) to my current team, I’m really excited about what 2022 & Customer Products hold. 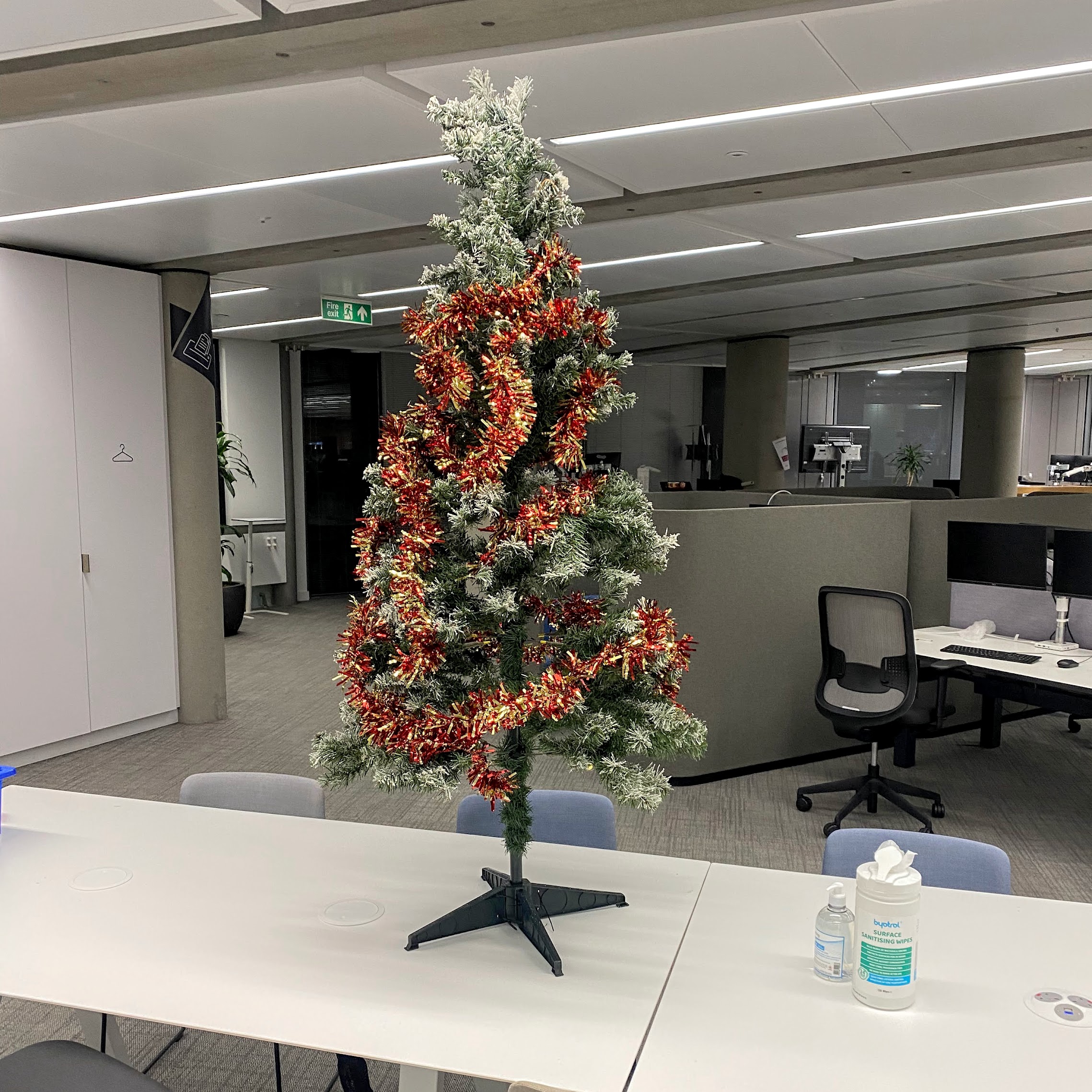 Nowadays everybody seems to have an opinion on offices and I'm fairly sure far too many people have heard my own ever-changing views... (fairly sure that I’ve alienated a few - if you’re one of these people, sorry!)

That being said - throughout both 2020 & 2021, while going to an office was an option, I found it genuinely helpful:

However something interesting happened in 2021 as the office and the City of London started to become a bit busier:

In 2018 a study found that unstructured open-offices aren't as helpful as people assume:

“The volume of face-to-face interaction decreased significantly (approximately 70%) . . . with an associated increase in electronic interaction.” (source)

So as many start to bring in hybrid-working patterns, my hope for 2022 is that technology companies won’t bring in a highly structured approach requiring staggered presence of disciplines on particular days (flexibility rocks!). Rather, I hope we'll instead see movement towards a “co-location of purpose” approach: Where groups can sit near one-another across functions, not constrained to a particular discipline.

Before the pandemic, in 2020 I planned to resume DJing. It was originally for fun, but in the early isolation of the first lockdown, having a creative outlet proved incredibly liberating.

However that was only part of the plan - I also wanted to make music, and for many reasons around having far too much to do, it didn’t happen. This year it did!

My project is called “AXWN” — a contraction of “Alex Wilson”, pronounced ak.soːn - and under AXWN I both play & produce techno.

Techno has simple building blocks - a 4/4 beat, a kick-drum, some percussion and maybe a synth - allowing some of my favourite artists to be hugely expressive. Simple enough to make something good, right?

Things always seem simple until you start learning about the process. It involved getting to grips with the different components of a track, mixing so that everything sounds correct, arrangement, and the basics of sound design. I finally had an excuse to start learning about synthesis which - is genuinely fascinating. I watched & read a lot of material on the topic, but this interview by Wendy Carlos in 1989 for BBC 2 really stood out.

Time working on music passes by really, really quickly. Quicker than during the bursts of hyper-focus I get while writing code or with other hobbies. Since music is a series of events happening over time, the only way really check your work is to listen - and so 30 seconds on repeat suddenly became minutes, and before I knew it, hours...

There’s a lot of tracks that I’ve been noodling on for several months now. This, which I actually started the Ableton project for in 2020, is still heavily work-in-progress.

This year I really wanted to ship something, and so in December I had a project combining several fun ideas I’d discovered over the year, which I then mastered and shipped. It’s called “Space Dragon On The Go” - the name came quite late into the process, but it seemed to fit and so stuck.

It’s available on pretty much all streaming platforms and for sale on Bandcamp & Apple Music. I’d really appreciate any support or feedback.

Next year I’m definitely continuing this journey, and after finishing a few more projects I really want to try and produce an entire album. I’d also quite like to learn classical piano - there are a few things I regret about my childhood, but missing the multiple opportunities to learn piano ranks near the top.

Oh yeah, and I picked chess back up. My puzzle-rating on chess.com is something like 1400 - but my actual rating is still pretty bad. (To be fair: I haven’t played many rated games against real humans). 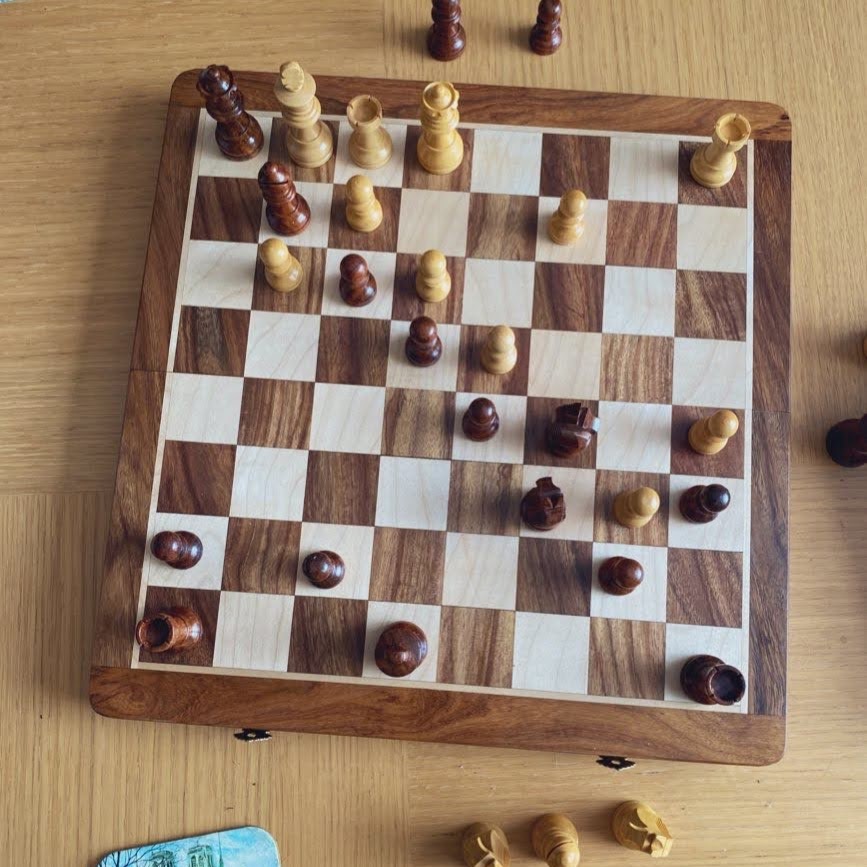 The FIDE tournaments have been genuinely nail-biting to watch and - while it requires a lot of effort to understand the commentary- they’ve been a really great way of relaxing.

In 2022 I really want to continue this journey. I’d like to develop my skills playing against human opponents and actually join a chess club, starting with the English Chess Federation. If I find the extra funds, I may also try and get a chess coach.

After years of not touching a single novel (Ready Player One & The Phoenix Project don’t count), last year helped me rediscover that I actually really enjoy fiction. And taking time away from screens to read has actually been pretty thrilling.

At the start of the year, I set myself the totally arbitrary target of reading 100 books. Having just completed that, I’ve managed to go through a wide mixture of books including:

On a side-note, I'm always looking for good book recommendations and would love to connect via Goodreads! 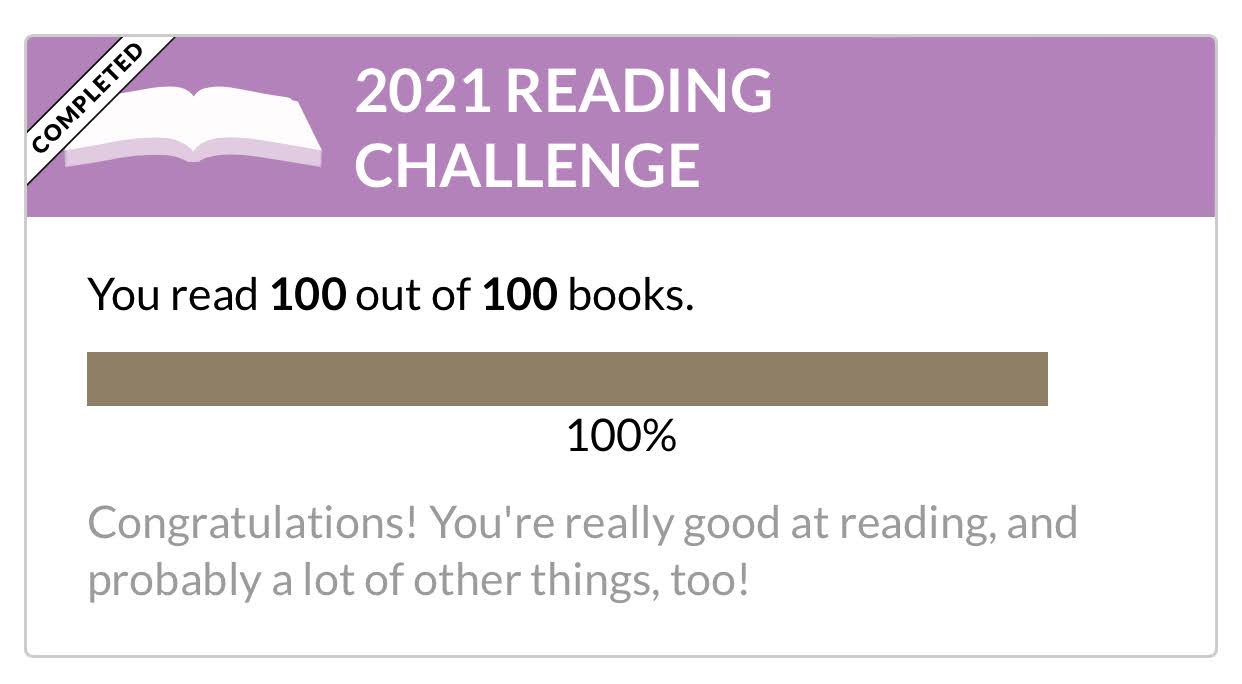 This is where this section pivots to writing. Quickly I realised that by starting to read so much, I totally tipped the input/output balance off-scale.

What I’d like to do more of in 2022 is to start writing more publicly - for me. There are a few reasons I haven’t got around to doing this, between confidence & prioritisation, but I now have a lengthy list of ideas & half-written abstracts and some tips on a writing workflow. Hopefully that’ll be something to start with.

(Who knows, maybe I’ll also start trying to do more public speaking - but one thing at a time)

Has this ever happened to you?

“Oh, Alex, you speak Russian?”
”Well, I’m permanently rusty because I speak it so rarely. But after a few days of exposure I’m pretty fluent.”
“Can you say something?”
“nyet”

Well, reader, it happens to me far too often. In trying to reconnect with my Russian heritage this year I also hoped to improve my Russian. I made it as far as re-learning reading & writing the alphabet, and later started watching Russian comedy. (Кухня - it’s rather good, and has an entire cinematic universe!)

But I think that trying to learn a language without a teacher and/or people to speak it with is really, really difficult. In retrospect this is why I stopped learning Japanese in 2019.

It feels a little arrogant of us to assume that by downloading hot-new-language app X we’re be approaching a speaking/listening level of competence in another language.

As soon as there is time & space, since I genuinely enjoy Russian, Japanese and German, I will try to find opportunities to join a language school, or tutor/tutor group. This is a years-long goal, one language at a time.

At the start of the year I decided to quit drinking outright.

After a few months of trying to do this and still socialise, I learned that remaining lucid around people achieving new heights of inebriation can be rather uncomfortable.

So, I caved, and started trying to find approaches to drink socially, starting with “wine-only” and going through a few iterations (including “half-pints only” - very, very dangerous)

Anyway here’s roughly where I got to:

Really though I’m looking forward to when more non-alcohol-centric opportunities to socialise become more viable. Going for walks & grabbing coffee with people this year was generally lovely - but finding other activities (including, I guess, chess?) would be nice too.

Last year I set a few goals via quarterly personal OKRs which worked relatively well, and this might be a sensible way to frame more concrete objectives, however I’m not going to attempt to set anything specific yet.

Instead, inspired by the theme system, there are three themes which have emerged:

I want to start writing & composing music more. At one point I was good at drawing, too, but right now it seems like a distraction. I would like, however, to produce an album - and ideally to start learning classical piano.

Lockdown has taken a toll on my mental health - not directly, but the small things such as repeated isolation and low-level anxiety. I found distance from people I care about really contributed towards rejection sensitivity.

In 2022 I’d like to try and find a “third-place”, something I lost in 2020, to provide distance from both home & work. Perhaps this comes from technology, music, chess, video-games or any number of other pursuits.

I’d like to find sustainable ways of living which don’t damage my health - and try to improve it. Historically I’ve focussed on weight alone - but this isn’t constructive.

With spring rapidly approaching, between walking & travelling, I’m hoping to find some of the novelty the past two years have hidden away.

Figuring out “What’s next”

In 2020 and 2021 I was quite lucky and managed to meet several career goals, however by focussing on a few specific areas and prioritising these I may have made more meaningful progress.

With the move to a new team in 2022 and the realisation that I want to spend some time in a Product Management role, I want to walk away from 2022 with a better understanding of where I stand and a (vague) career plan.

For anyone who has made it this far, I wish you a very happy 2022. Things may get weird but you can do it. Or at least, that's what I keep telling myself. And that's a wrap, thanks for reading!

How to be a CTO: Lessons from LeadingEng 2022

Taking a look through a Johari window