Taking a look through a Johari window

After getting a decent amount of positive, useful feedback while going through a number of recruitment processes, I was keen to take the opportunity to get as much unbiased, objective feedback as I could while winding down and offboarding from Bluetel. As well as speaking to some people — including former-colleagues — about their experiences with me over the years, I wanted something more regimented that I could compare against in the future.

Inspired by Anna Shipman's excellent post on using a Johari window to understand her strengths, I decided to try doing the same thing. Against her advice, I decided to use a Google form because I wanted to "own" my data.

On reflection it's entirely possible that this has biased my results, as it presents the options in a very linear format! Nonetheless I found a very nice tool by Kevan which I recommend for future exercises.

What was my process?

I sent out the survey via Slack to 8 random colleagues — whom I'd worked with at some point over my 5½ years — hoping to try and get as fair an assessment as possible. I'm quite confident that this was the best way of going about it, as only asking named individuals within a single team or two would have likely given feedback biased on factors unrelated to my personality (such as perceived performance, which tends to be rather similar within a given team).

Of that 8, I received 5 (mostly) anonymous responses. Then (without peeking!) I selected the six adjectives which I felt best fit my personality from my own perspective, and after mapping, ended up with the following window. 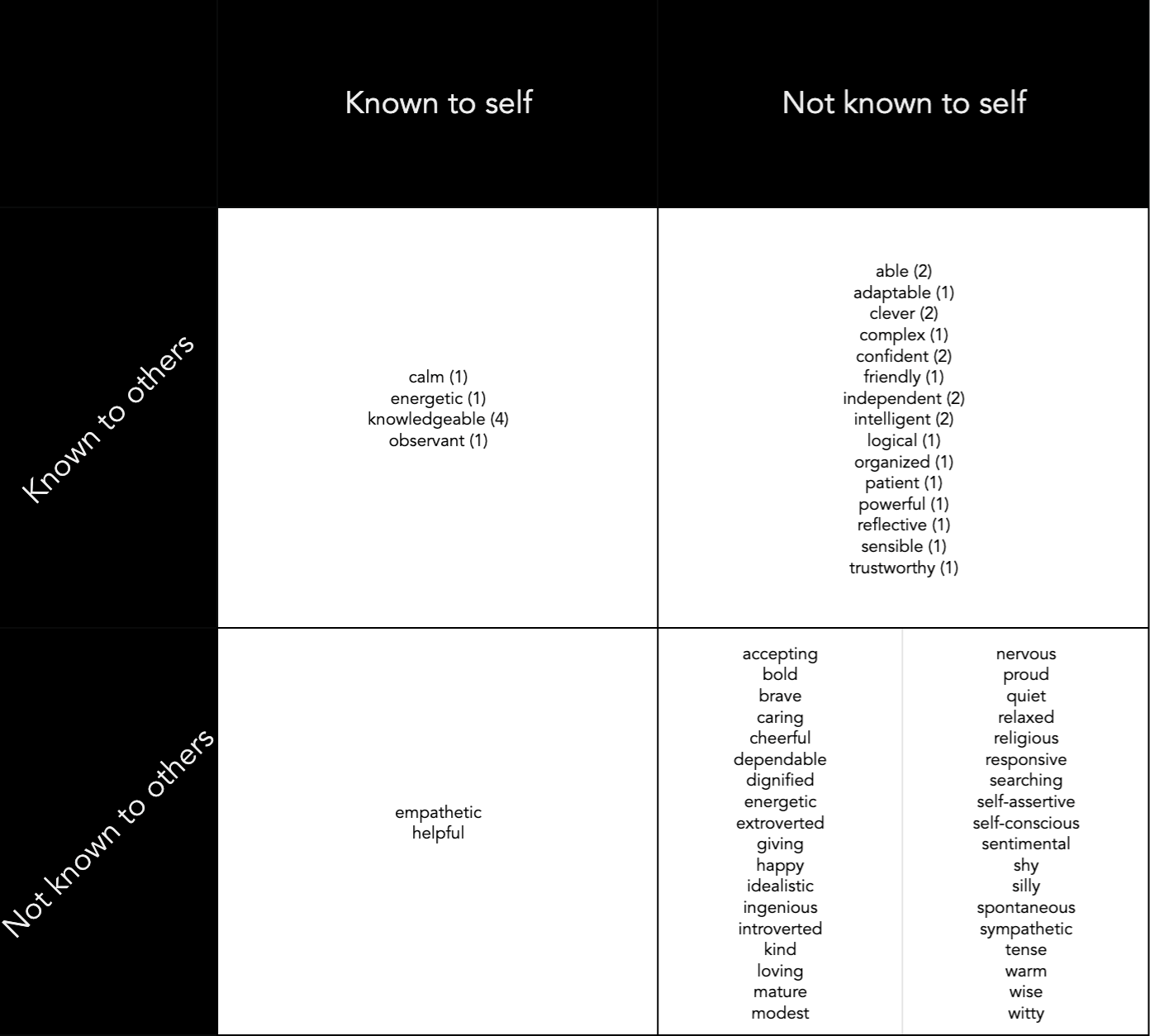 On the one-hand, these results are remarkably good! There's a trend towards more stoic personality traits which reflect my core values and I hope have made a net-positive impression on people I've worked with. For now at least, this works wonders for my imposter syndrome.

On the other hand, two other values I felt like I had carefully internalised — Empathy and Helpfulness — did not come up at all. It's possible that some of the ambiguity in the traits which were identified alluded to the same thing, however instead of dwelling on possibilities, I think that this simply marks an opportunity to better direct future requests for feedback from the people I work with. Then comparing future results against these in a few years time perhaps I will come across a bit better. Or perhaps I will have changed tact completely?

Overall the Johari window process has been hugely motivating and has shown me where and how I can continue to develop. It's remarkable how much power a feedback process which entirely excludes negativity can have, for personal growth!

I am glad to have gone through this exercise and strongly recommend you, dear reader, do the same.

How to be a CTO: Lessons from LeadingEng 2022